An exciting new story called: The Game by Maria Richards

Stimulus – The World of Jumanji In 1981 Chris Van Allsberg wrote a book called Jumanji. In the story, a brother and sister discover a game that turns fiction into real life. Whatever square you land on in the game, brings a new challenge to overcome. Worst still, the challenge becomes a reality for everyone around. If you have access to the Interne, click the link:

This is a link to the original movie trailer for Jumanji in 1995 and you can see the consequences of playing the game! First check with an adult that it’s ok to do this.

You can listen to a recording of The Game story below here: https://soundcloud.com/talkforwriting/game The Game

Danny and Susie were bored. It was wet play again and it felt like they hadn’t seen the playground for weeks. Rivers of greasy rain streaked the classroom windowpanes and pooled to make gigantic puddles in the centre of the netball court. Another lunchtime inside was clearly stressing Mrs Allbright, as she seemed to be tense and a bit more snappy than usual. She sat at her desk with a steaming cup of tea and marked books with the ferocity of a wild beast. To top it all, every good game was being used and only the tub of dominoes was left. Everyone knew that half of them were missing and the other half had been chewed by the school ‘Reading Dog’. Danny and Susie searched the classroom for something to do. To their dismay, the comic box was empty, the iPads had been snapped up by Freya and her gang and Billy seemed to have started a resurgence of the game Slap, which didn't look like fun at all. As the two friends  squeezed past the art table to get to the wet-play books, a tatty, cardboard box fell from the top shelf of the bookcase.

Susie picked it up. “I’ve never seen this game before,” she said, wiping the dust from the unusual lid. It was embossed with intricate patterns and around the edges were pictures of animals, insects and other strange creatures.

“Oh come on, let’s play. There’s nothing else to do,” suggested Susie, smiling widely and shaking the box. They sat down in a quiet corner, lifted the lid and took out the board.

What next? We’ve stopped at an interesting part of the story. Summarise what you think could happen next. Send your teacher your ideas.

Mrs Solanki's favourite reading websites to watch and listen to. Hope you guys enjoy them too.

A summary of what has happened so far in Kensuke's Kingdom.

Mum, Dad, Michael and Stella (sheep dog) are a happy family. Michael loves playing football with his best friend Eddie, they are in a team called the Mudlarks. Unfortunately, they don't stay happy for long because mum and dad have become redundant. Michael is the only one with a job in the family doing his paper round, dad becomes very stressed and leaves home  to find a solution. During this time Eddie, Michael's best friend, also leaves. His family move away, so Eddie gives Michael his football as he waves him goodbye. Dad returns home with a bombshell: he has bought the Peggy Sue. The Peggy Sue is a boat which he wants the family to travel on for a year or longer. He wants Mum to be the captain of the ship whilst Michael is home schooled (similar to us).

One day, Stella is on deck while a storm is brewing. Michael goes to get him but they both, with the football fall into the sea. The next day they are both on shore, safe. They venture through the forest and stay on the beach. One day, Michael gets injured and Kensuke (the man on the island) saves him. He nurses him back to his old self and they become friends.  Kensuke calls Michael Micasan because he treats him like his own son.

Chapter 8: Everyone dead in Nagasaki.

Question 1. What or where is Nagasaki?

Question 2. Who do you think is telling the story: Michael or Kensuke and why?

Question 3. How do you think people will die?

Click on the video below and answer the following questions:

1. How did Kensuke's character change from the start of the video to the end?

2. Role on the wall: draw or write what Kensuke is thinking on the outside of the person and how he is feeling on the inside. Use the video to help you draw your conclusion.

Think about your early warning signs to help you remember.

Chapter 8 - Part 1 - Everyone Dead in Nagasaki 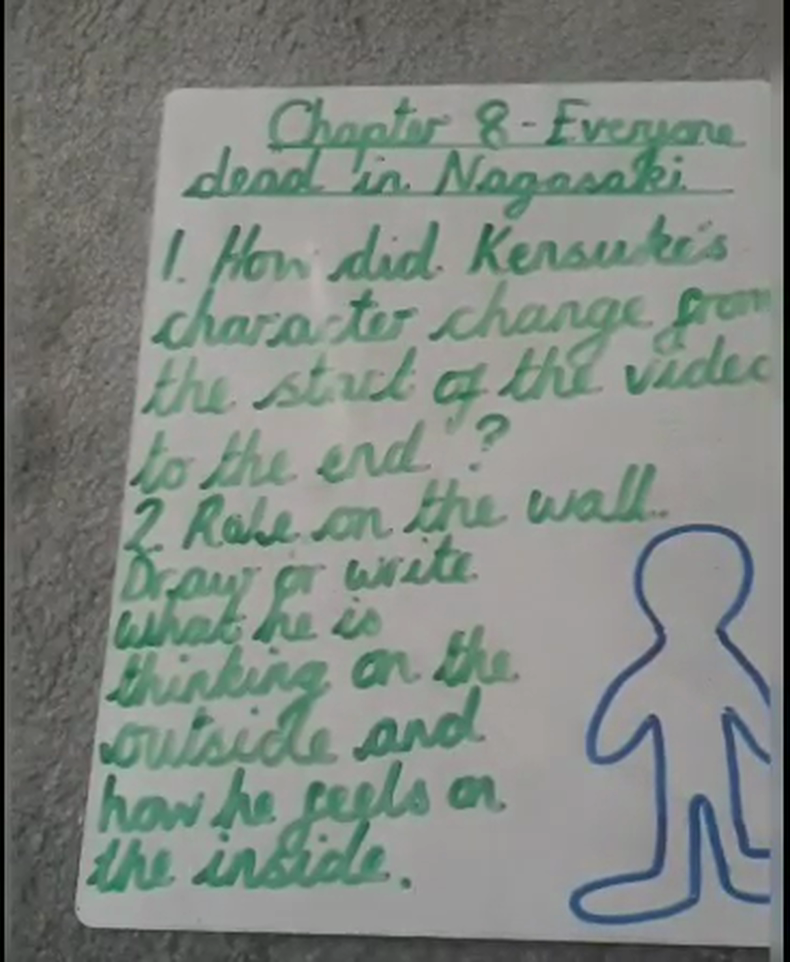 Listen to the video of Mrs Solanki reading a section of chapter 8 and have a go at answering both questions from the whiteboard.

Hey everyone, hope you're all doing well and staying safe.

Every week I will upload the new maths learning for the week.

Use the White Rose Maths to find out about your new learning. Watch the videos daily, there will be an activity to try out each day and there are answers for parents too :)

Week 1 - Understanding the place value of decimals and decimals as fractions.

Week 2 - Rounding, ordering and comparing decimals and the introduction of percentages.

Games to help you learn

Remember to keep practising your spellings. There are different ways you can practice:

Look at the word, cover the word, write the word and then check it.

Write the word out 5 times every day.

Each letter will be written in the order of the rainbow.

Practice your spellings the best and most enjoyable way you can - it helps! Some of our Year 5 pupils are training to be ICONS Ambassadors as part of their work on being an International Cross of Nails school.

Their first day was on Tuesday 11th February and they have written about their experience.